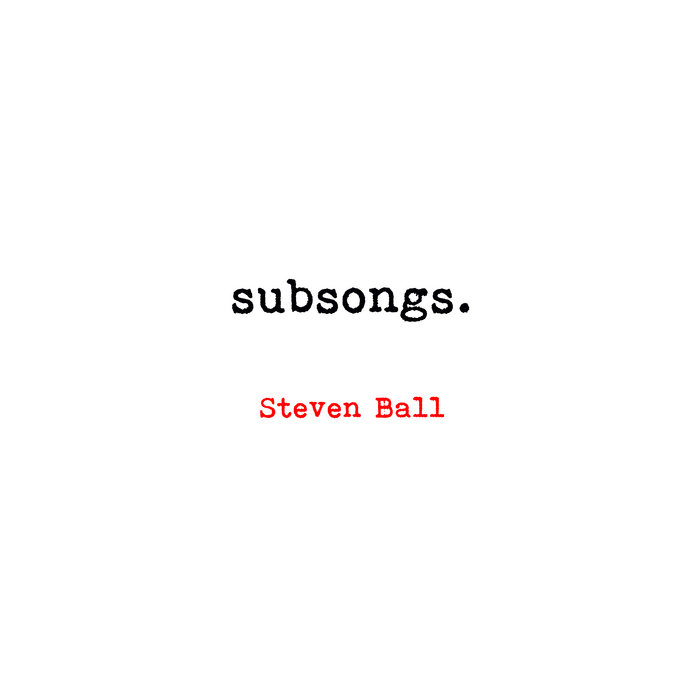 subsongs. is a collection of songs written and recorded between 2016 and 2017. The lyrics are plucked from a miscellany of themes and sources, employing diverse, sometimes reflexive, often experimental approaches to writing. These are 'almost songs', never rhyming, and rarely forming a conventional structure, such melody as there is often relies upon repetition and reiteration, all set to a musical palette of guitars, software instruments, samples, and occasionally field recordings.

"This Mr S Ball is a long-time man. Spending decades in Storm Bugs this is the first solo album that I’m aware of and certainly his first full album for the wonderful Linear Obsessional group.

Classy from the uncluttered front cover art to the spare arrangements for instruments and voice – this is a disc as bracing as an arctic northerly blast.

This collection of real songs is unfussy and focused. Steven’s voice never raises much above a conversational hum, a sing/speak that’s both comforting and hypnotic. The very normality of his vocal approach makes this an arresting enough listen – but couple this with the barely-there arrangements and you are on to a winner.

Like the Wu-Tang on their 36 Chambers best Steven practices the secret art of sticking to one distinct, lopsided sample/loop and letting it breathe. There’s no smothering hiss on this finely recorded disc and spare bass, guitar or piano (but rarely playing at the same time) create a soft scaffold. ‘Inside’ showcases this approach wonderfully with a handful of descending bass tones capturing a whole suitcase full of moods.

An emphasis on structure and organically developing themes makes the 15 min ‘Of the Yard (after Terry Ball)’ an exercise in deeper listening and repetition. Sort of like a kitchen sink version of ‘There was an old lady that swallowed a fly’ cribbed from unpublished poetry notebooks (which the notes suggest it was).

Less esoteric matters are discussed on ‘Garage/Band’. What could be a withering snark at underground poseurs ‘pretending to be bored’ Steven delivers with a kindly wink, and avuncular sigh – we’ve all been there eh?

The missing link between reductionist improv and the intimate breathy song cycles of a Robert Wyatt."
Radio Free Midwich
radiofreemidwich.wordpress.com/2017/10/18/dense-as-blood-rfm-on-maalem-mahmoud-gania-baccamchayer-and-broken-shoulder-ij-grey-guides-and-steven-ball/

Written, performed and recorded by Steven Ball with the exception of:

subsong includes a recording of an anonymous cellist under Blackfriars Bridge,London.

Periscopic includes samples of original soundtrack music by Ernest Gold from the film "On The Beach" (Stanley Kramer, 1959)